Wow, I've had a busy and challenging day! This morning I decided it was time to have a go at creating a new logo for Julie Walton - Handmade beaded Jewellery.

For a while now, I've had a favourite necklace and, what I think, is a fab photo of it (particularly as a lot of my photos are not as good as I'd like)! My husband and I also liked the look of my "new look" Blog, which I tackled about a week ago, so with those two in mind I have come up with this using Microsoft Powerpoint, which I'm really pleased with. 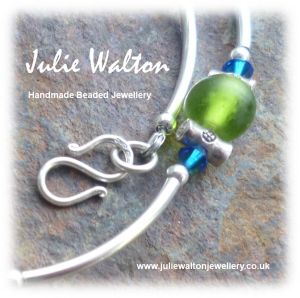 Next step was to upload it to Facebook - no problem. Then Twitter - oops, couldn't get that to work until I realised that the file size was too large so the photo had to be resaved as a .jpg which resolved the problem.

Then I realised that I had followed a number of people on Blogger via Twitter which was showing as my old photo. What I really wanted to do was follow everyone using Google. How do I stop following blogs I currently follow via Twitter? Well, I didn't know how I'd done it in the first place so that was already a problem! Then I found a link to a blog post that described the problem.

Well, that was OK but I obviously didn't really understand the answer so after a lot of tinkering, the answer finally fell into place. Now, all links to Blogs I follow are via Google with the logo above showing. Yeh, a successful day, and I'm now more knowledgeable than I was this morning!

Your thoughts on the logo would be gratefully received.